As I have so far only posted incredibly wordy and lengthy posts on this blog, I thought I’d share something more picture heavy. As I just reviewed The Godfather, I thought it was a good excuse to reminisce about my trip to Sicily last year. 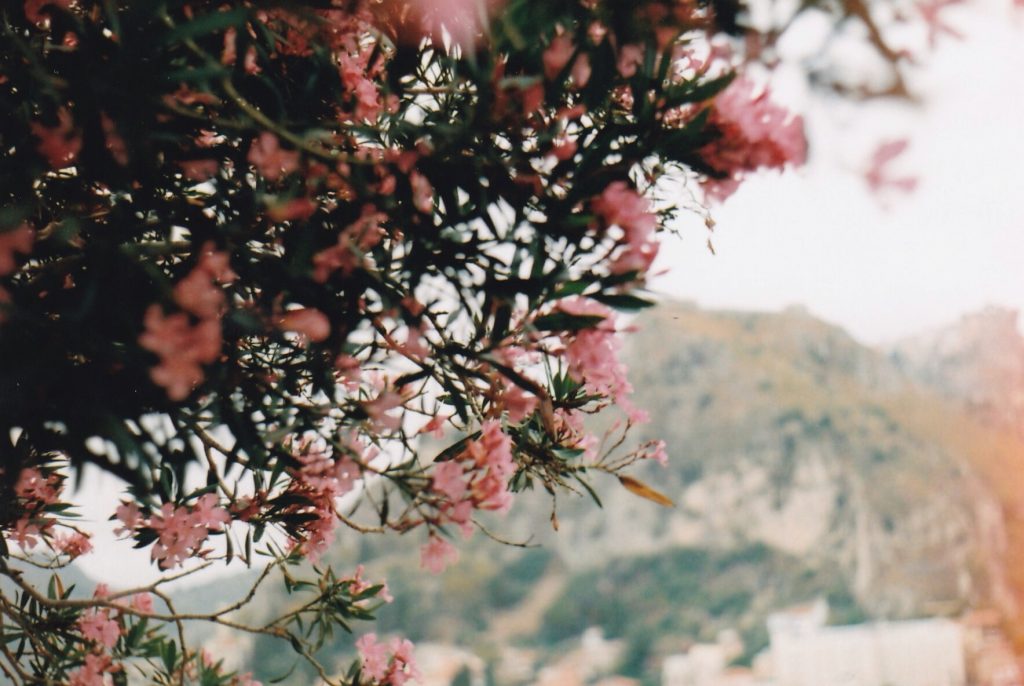 I stayed in Taormina, a town built into the hills and overlooking the ocean. It is a beautiful little town, with shingle beaches, an ancient Greek amphitheatre and public gardens that contain not one, but two gravestones memorialising murdered dogs. Yeah, I don’t know either. 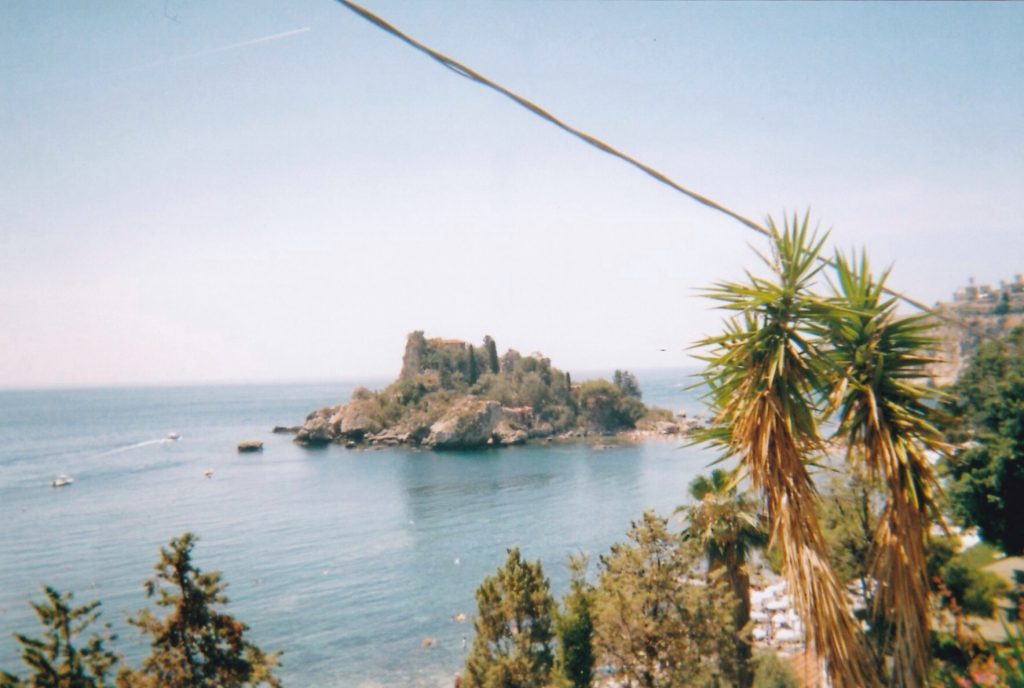 I’d visited before with my mum, and thought it would be perfect for a solo trip. I could stay in the town and have my pick of restaurants without having to wander too far on my own at night, and then relax on the beach during the day. I hadn’t considered, in my plan, that the weather would be anything other than glorious. It wasn’t. It rained every day that I was there (and I was only there for a very short amount of time), and when it wasn’t raining, it was threatening to. There was only one day that I was able to take advantage of the beach (and the view of Isola Bella pictured above) and even then, it started getting very windy and cold by three o’clock, and when I headed out for food in the evening it absolutely pissed it down, completely drenching my shoes, which meant I spent the next few days walking around in wet footwear. Not great. 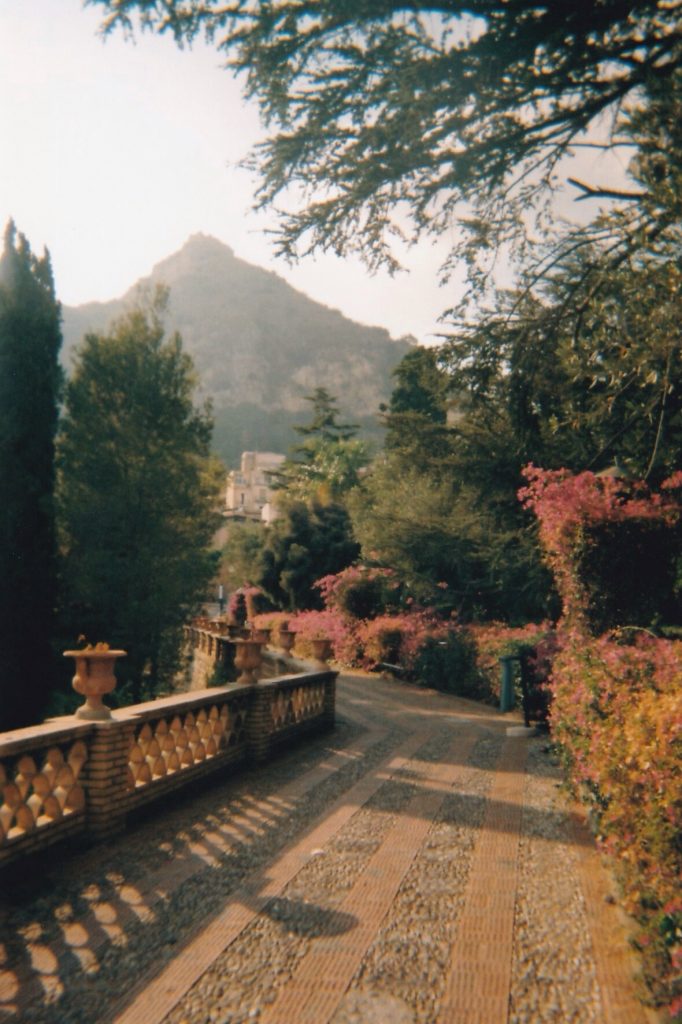 And while Taormina is lovely, and I would wholeheartedly recommend it, when you are expecting to spend your time reading by the sea, it becomes difficult to fill that time with an alternative when everything else that is within walking distance is easily do-able in a day. When it was dry but not warm enough to sunbathe, I headed to the dead dog gardens (there is more to them than that) and had a wander and a read. When mum and I visited we came across a litter of kittens there that we visited every day. Unfortunately, there were no kittens in the gardens when I visited. Strike two. 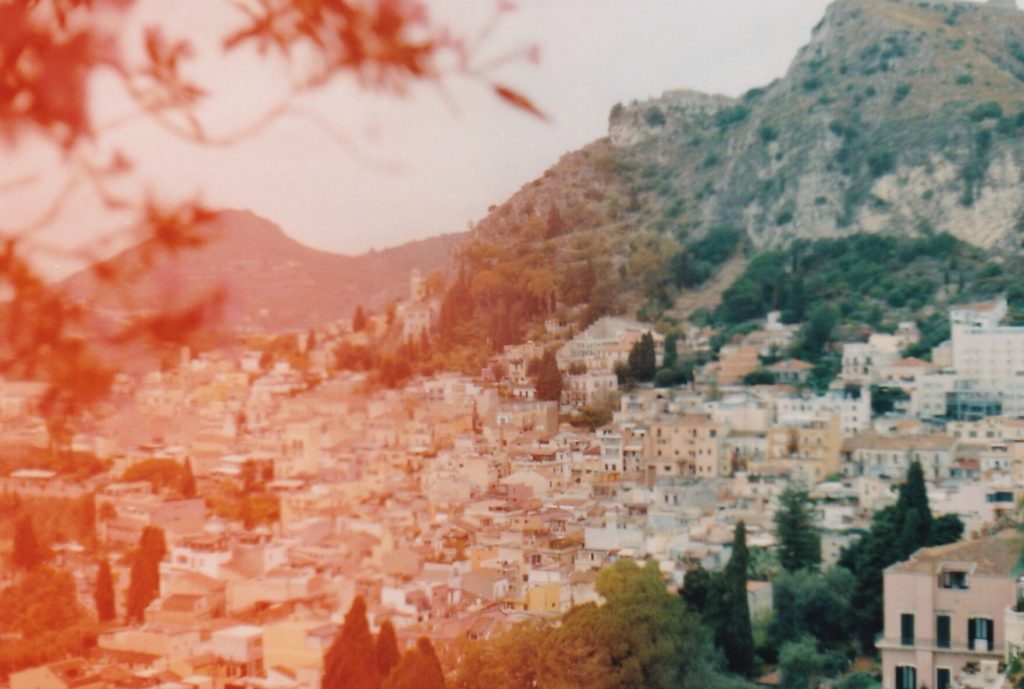 Not only was I not having luck with the weather, or with kittens, I also took my newish film camera (obviously everything is relative, it wasn’t new new, but I was still getting used to it) with me to document and practise film photography. It was my Grandad’s camera before me, a Praktica MTL3, German design, practically indestructible… until it met me. We were both getting on just fine until I had finished my first roll of film and started to wind it back in. The thing jammed, and wouldn’t un-jam until I heard the film tear apart. Also, not great. 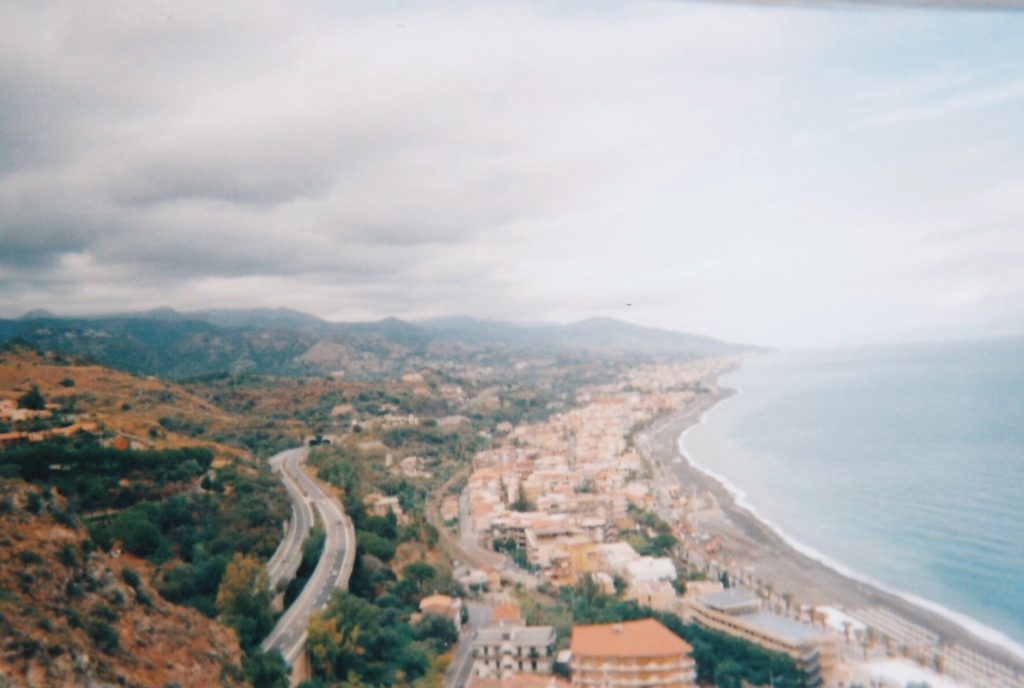 To compensate for all the bad luck, I booked myself a ‘Godfather Tour’, an excursion that takes you around some of the locations used in the first film. In case you are unaware (or just not as big a fangirl as me), The Godfather was not actually filmed in the town of Corleone (nearer to Palermo on the island) as it was too modernised. Instead, Coppola & co filmed the Sicilian scenes in Savoca and Forza D’agro, both of which a relatively close to Taormina – making it an ideal place to stay in Sicily if you too want to geek out about The Godfather as much as I clearly do.

A word of warning though for any fellow fans, this tour is not for the faint of heart. Some of the towns used are incredibly high up, and the drive to and from them is up winding roads that don’t seem wide enough for two passing cars, let alone a bus. I’m not generally too afraid of heights, and this had me feeling pretty nervous. 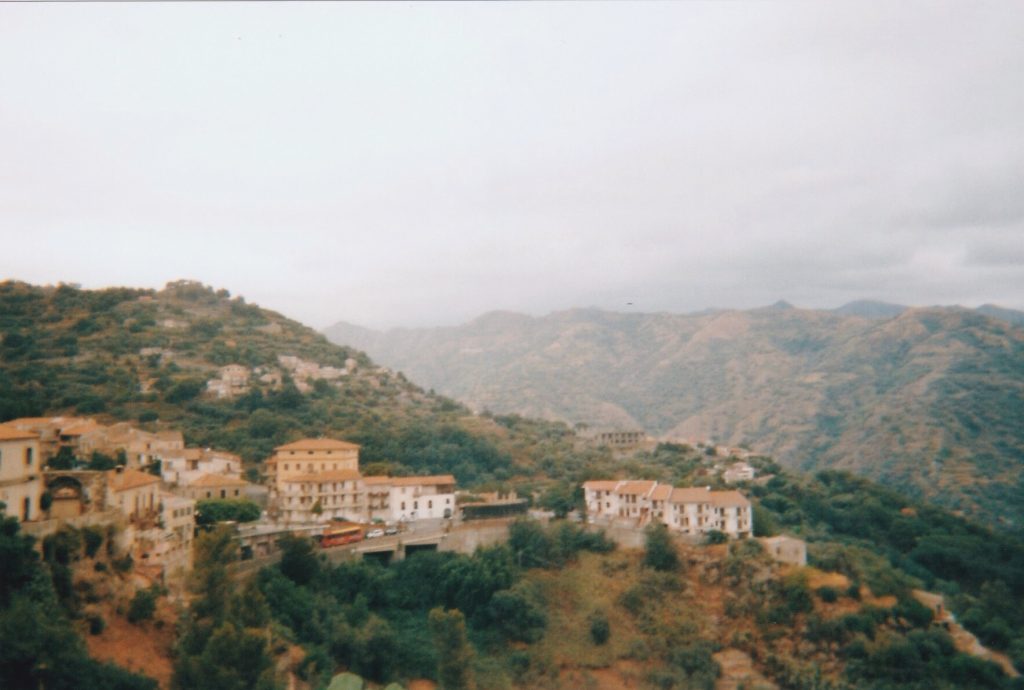 If you can stomach it though, the views are incredible. And the town of Savoca (pictured above, from a distance) is well worth a visit. It is a sleepy town, that feels frozen in time with cobbled streets and no cars in sight. And even though I went with a group of people, it was still very quiet, and as I walked the streets I hardly passed by anyone. 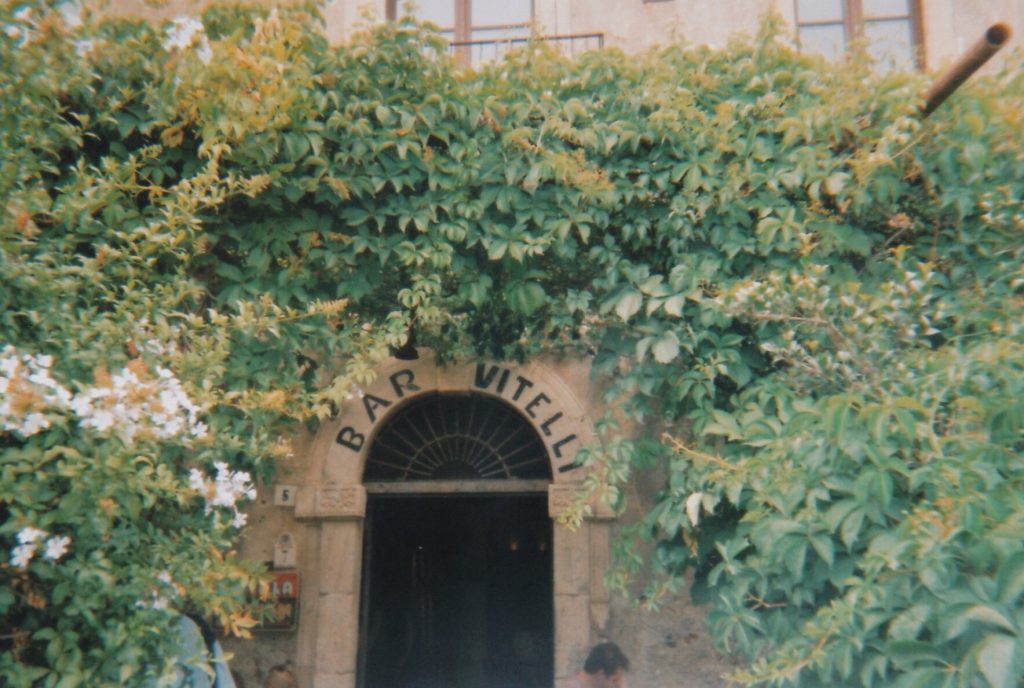 While there you can visit the church where Michael and Apollonia get married in the film, as well as the bar where he asks her father’s permission to marry her – Bar Vitelli. It is perfect for a fan of the films, and just a sweet little town even if you’re not. 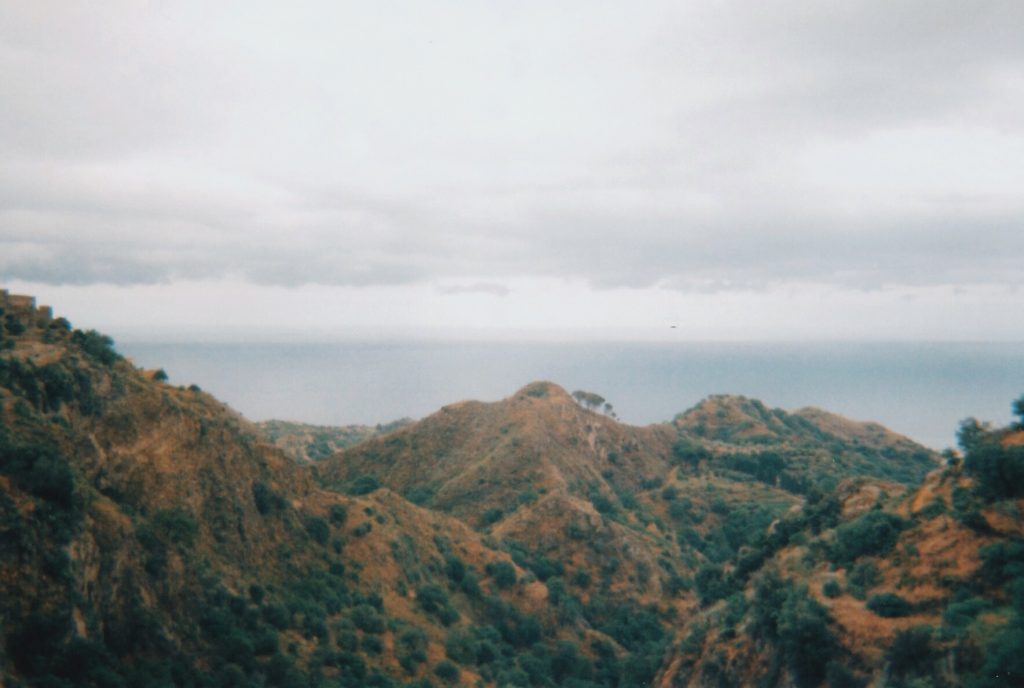 I would like to explore more of Sicily in the future, and revisit both Taormina and Savoca – hopefully next time I’ll leave the rain at home.

A Walk to Mumbles

A Weekend in Tenby – Part One

A Weekend in Tenby – Part Two