The Godfather – A Book Review

‘You’re ready‘ my mum said, proudly.
I was twelve years old, it was the weekend, and my mother had just deemed me worthy enough to introduce something of the utmost importance to her – The Godfather.

She pulled out the three VHS tape box set she owned, which contained the first two films, and put the first one in the tape player. We sat back, and I was introduced to Vito Andolini, a young Sicilian boy attending his father’s funeral – my mum’s edition was in chronological order, I didn’t realize until later that most people heard ‘I believe in America‘ first, and not an Italian brass band interrupted by gunfire – and I was hooked.

It is difficult to think of any other film that has had quite the same impact for me, it has always felt incredibly personal (cue Sonny quote, ‘he’s taking it very personal!‘) because my mum passed it on to me, a film she loved and admired and wanted to share with me, even when I was technically too young to watch it, because she respected me enough as a person to believe I was mature enough to understand it, and love and admire it too. It is such a beloved film by us both that we even went on a sort of pilgrimage to Sicily, revelling in the many references to it whilst there, such as the score drifting down the street as we walked, restaurants with signs that say ‘eat the fishes, don’t sleep with them!‘. Heck, I even went there on my own last year and took a Godfather location tour on my birthday! We’re in deep.

So naturally I have always wanted to read the source material, a novel by Mario Puzo. I was intrigued about characters’ inner workings that couldn’t quite be captured on-screen, fascinated by what must be a landmark piece of literature because it created a landmark film. So I finally set aside time to read it, ready to sing its praises once finished. 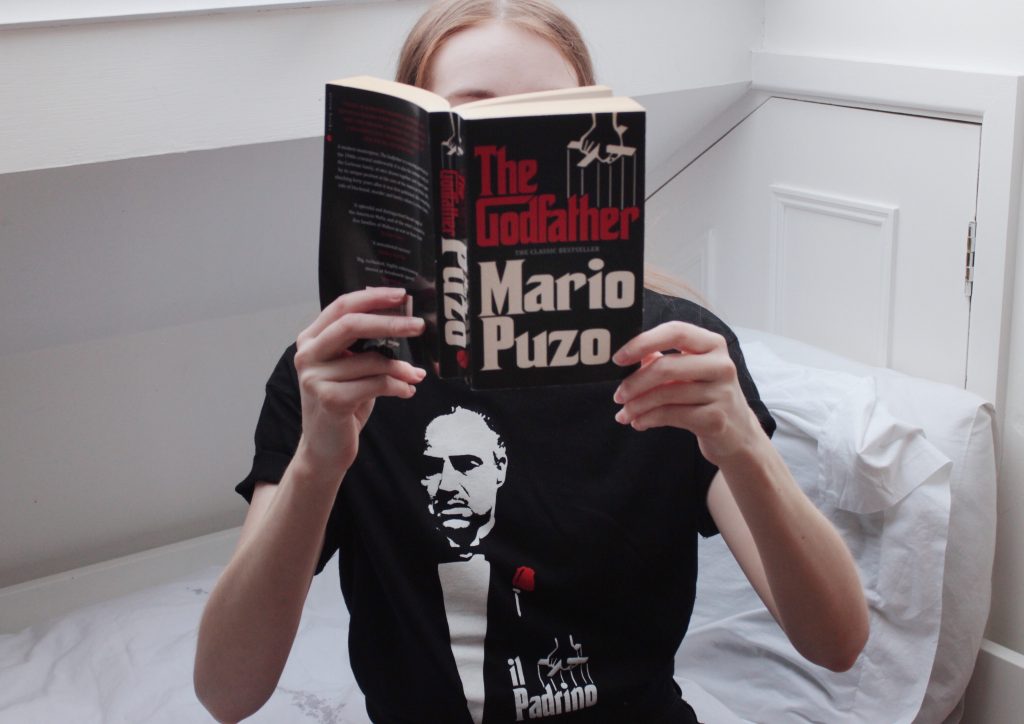 Well, I finished it. And I’m not full of praises.

But let’s start at the beginning. For the uninitiated, The Godfather – both book & film – is about the Corleone family, which, as well as being actual relations, also operate as a crime family. The head is Don Vito Corleone, a Sicilian American who grants his friends ‘favours’ and offers his enemies deals ‘they can’t refuse’. His youngest son, Michael, has nothing to do with the family business, and wants to keep it that way, but, to quote a different Brando film, just when he thinks he’s out, he gets pulled right back in. It is a mafia story from the perception of the mobsters (unusual at the time), where the violence is secondary to the characters and their motivations.

Unlike the film, the novel also follows the trials and tribulations of Johnny Fontane, a famous singer and wannabe actor. He appears very briefly at the start of the film to ask his godfather, Vito Corleone, a favour. In the novel, however, this just marks the beginning of an entire subplot about celebrities and ‘the movies’. He struggles with having lost his singing voice and fearing he is losing relevance. He reconnects with an old friend, a friend who now has a better voice than him but doesn’t care to utilise it, only wanting to drink himself to death. It is a sub-plot that goes nowhere, that adds nothing to the core story or characters, that interrupts the flow of the main story. It certainly doesn’t help either, that Fontane is one of the most unlikable characters. And in a book that follows Mafia hit-men, I think that is really saying something.

But Fontane’s isn’t the only subplot from the book that is missing from the film. When not following the Corleone clan, we also follow, on occasion, Lucy Mancini. She is another character who appears only momentarily at the beginning of the film as the bridesmaid that Sonny sleeps with. And again, that appearance is still in the novel, in graphic detail, but so are their other liaisons, where it is discussed, in detail, that Sonny has a huge penis. This small detail is repeated over, and over, and over again to the point where I honestly think Puzo thought that having a big schlong constitutes as some kind of character trait. It doesn’t. But Lucy’s arc isn’t only confined to Sonny and his massive dick, oh no, she gets an entire arc dedicated to her vagina. Yes, you read that right. And I have to say, it’s where Puzo really lost me as a writer.

Before I go on a long rant here about the terrible treatment of women in this novel, I want to preface it by saying that I had literally zero expectations going into this. I’ve seen the films, I know Mama Corleone barely even gets a name, I know Connie exists solely for the plot, I know Kay exists mainly for exposition purposes – I know women have next to no role in this story. I didn’t start reading it expecting some great feminist text, I knew hardly any female characters would be named, I knew they would fall into stereotypes, and I knew we would barely hear or see them. I didn’t even expect the minimum that I would have of any other piece of fiction and still, I was disappointed.

Michael falls in love with Apollonia the instant he sees her (as in the film), and his response to that emotion? That he wants to literally possess her. Connie Corleone constantly calls her adopted brother Tom Hagen seeking consolation, advice and help whenever she is physically attacked by her husband, and his response? How much her moaning annoys him. The introduction we get to Fontane is him beating up his wife. And her reaction? Laughter. She laughs because he isn’t ‘manly’ enough to beat her well. Yeah, try to ruminate on that. And honestly, a lot of the really sexist crap comes from Fontane’s plot. And while the above examples are not great in their depiction and view of the female characters, it is easy to argue that these instances exist to highlight the toxic ways in which these men think and act. They are terrible people, it is expected that they will do and say terrible things. And though uncomfortable to read, doesn’t necessarily point to the author’s views – although we rarely see the point of view of these women, and when we do, they are heavily stereotyped and still steeped in sexism. It became hard to see this as Puzo’s intent, and more his own inability to write female characters. And nothing highlights this more than the one women he focuses on the most. Enter Lucy Mancini and the vagina plot.

You see, poor Lucy has always had a loose vagina. She doesn’t appear to have any health-related issues to this, apart from perhaps mental – which is never fully explored – instead this is a big issue, and only an issue, because men don’t get as much pleasure when they have sex with her. There is no mention of how good sex is for her, whether she gets on just fine, only that it is a problem for men. Enter Sonny with his colossal cock, ‘the perfect fit’ for Lucy, and we get to read pages and pages about how great his genitalia is. But then, when she can’t sleep with him anymore she shacks up with a doctor who tells her, moments after sleeping with her for the first time, that ‘hey, there is this great operation that’ll tighten you up!‘ Yippee! And, of course, she agrees to it immediately. She doesn’t ask any questions related to possible side effects. No probing about how the procedure works. No second opinion. Just straight to, ‘yep, sign me up for invasive surgery please!’

The worst thing about this sub-plot isn’t even just the poor treatment of this character, but rather that this tangent has absolutely no impact on the actual plot. Ok, maybe ‘the worst thing’ is a poor choice of words, because absolutely nothing I have ever read is worse than the vagina plot, but if it has to be in there (and it doesn’t) at least try to pretend that it has some relevance. It doesn’t even intersect with Fredo Corleone and the Las Vegas plot, despite taking place at the same casino Fredo works in. Take out Lucy Mancini and the book doesn’t suffer, in fact, it greatly improves. I would rather female characters are not included in stories at all if they will just be relegated to a literal plot about their ability or inability to please men. That is what I expected from this book, poorly written but barely-there women. I can’t believe this is what I got.

The truly frustrating thing – and again, I am exaggerating, because nothing has ever been more frustrating than the vagina plot – is that I was enjoying the book until it showed up. Sure Fontane was annoying and I could have done without him, and yes, there was still plenty to roll my eyes at. But I find Michael’s story engrossing and compelling, and it had me gripped. Even though I know each plot point. Even though I saw each twist coming. I even got a little teary-eyed part way through when the ‘toll booth incident’ occurs (trying to keep relatively spoiler-free, vaginas aside). If the novel just followed the Corleones, I would have regarded this book a lot higher than I do. I would have still struggled with the portrayal of women, and I would have still considered it a piece of pulp fiction, but it would have been enjoyable pulp. Unfortunately though, the novel doesn’t just follow the Corleones, and it greatly suffers for it.

At least the film got it right.

If Beale Street Could Talk – 7 Days of Books